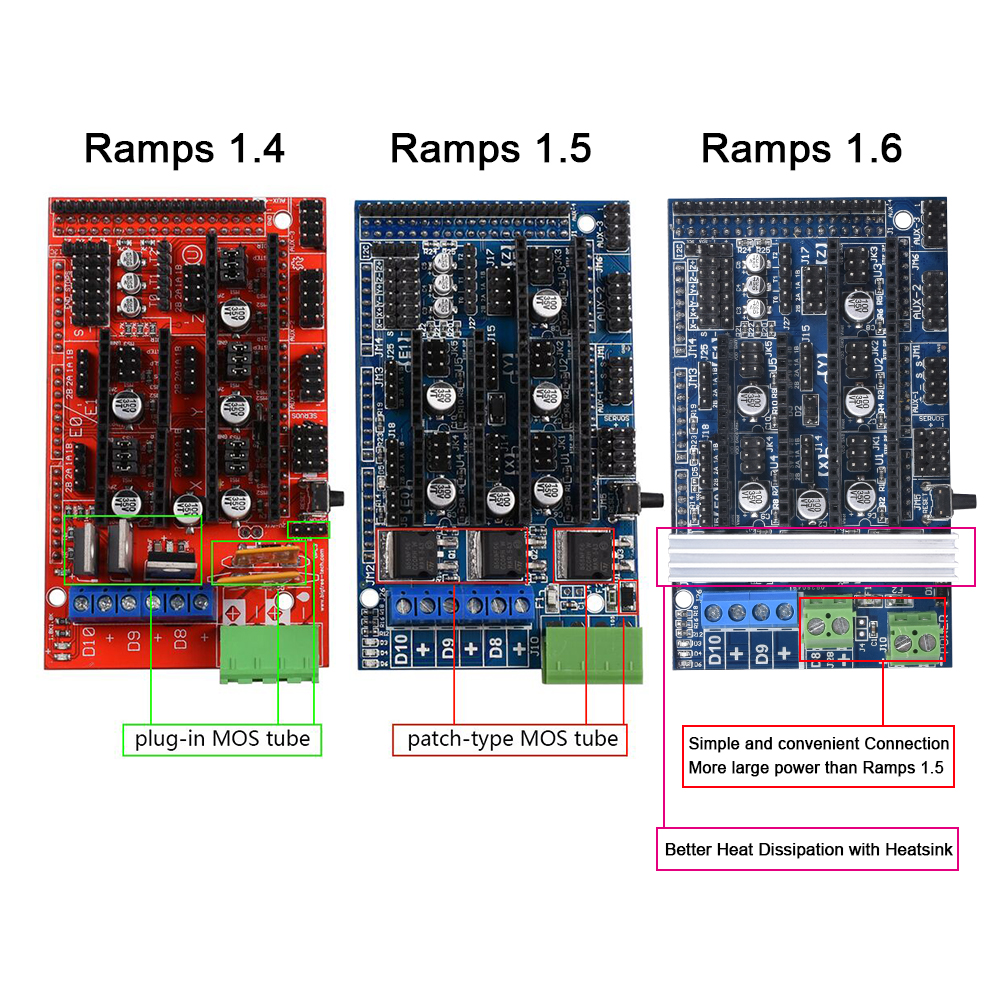 8 Bit 3D Printer Boards are becoming a thing of the past but there are some new and affordable options to choose from. These 8 bit 3D Printer controllers can still operate basic Cartesian machines with no problems. Here we will name a few but not all as some are discontinued, obsolete or are legacy models. Here is a brief overview comparison of 3D Printer Controller Boards we have used over the years.

By time you read this there will probably be a ramps 3.9 at this rate.

Both use the same mosfet but simply have them installed differently: the RAMPS 1.4 has them oriented sideways with a heatsink in away that allows it to be easily plugged and unplugged; the RAMPS 1.5 has the mosfets soldered flush to the surface with flush heatsinks on the bottom of the board.

The RAMPS 1.5 uses small soldered fuses rather than the large yellow fuses prone to breakage on the RAMPS RAMPS 1.4. – source

There is also a RAMPS 1.6 version that has an added heatsink and different power connectors. 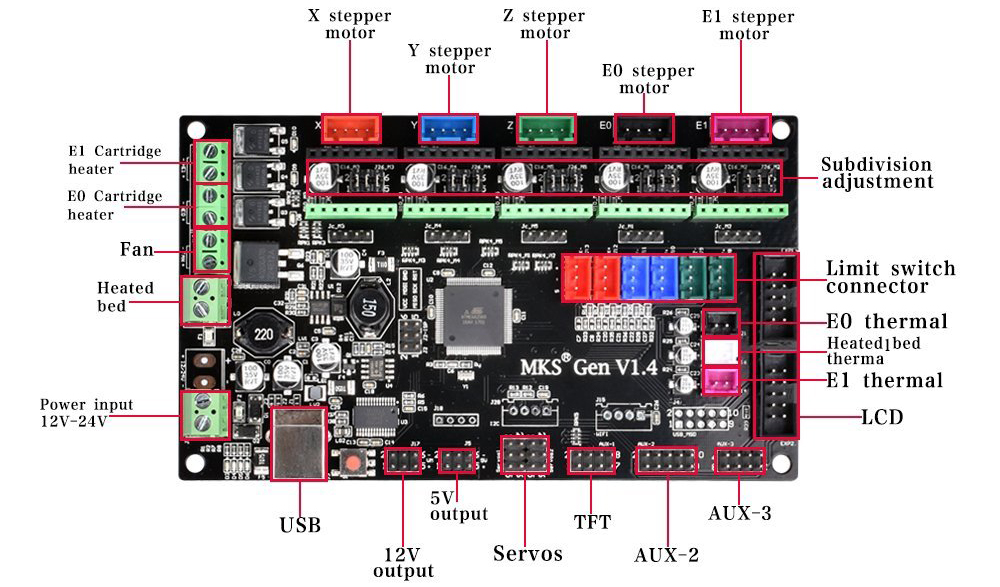 MKS Gen V1.4 is made by a Chinese manufacturer Makerbase. MKS (Makerbase) are manufacturers of 3D Printer controller board also know as mainboards that run Marlin, Repetier and other firmware.

This board was designed from the RAMPS 1.4 Schematic so many of the pins are the same when configuring your Firmware of choice.

MKS Gen is a feature rich all-in-one electronics solution for Reprap and other CNC devices.

It features an onboard ATmega2560. Its five motor outputs are powered by Pololu pin compatible stepper drivers.

The board features a developer friendly expansion port supporting giving access the same as Ramps1.4.

MKS Gen is designed to be flexible in the user’s power source availability, allowing any power supply from 12V-24V. –source

Check out our article on this board: https://3daddict.com/mks-gen-v1-4-mainboard-controller/ 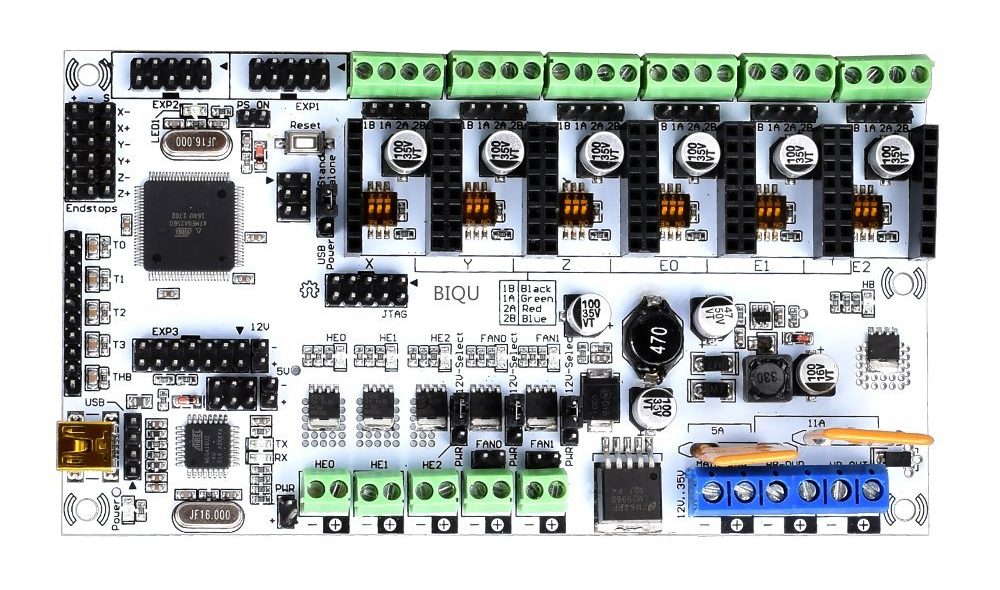 It features an onboard ATmega2560. Its six motor outputs are powered by Pololu pin compatible stepper drivers.

The board features a developer friendly expansion port supporting giving access to all unused I/O, ADC and I2C pins.

RUMBA is designed to be flexible in the user’s power source availability, allowing any power supply from 12V-35V. –source 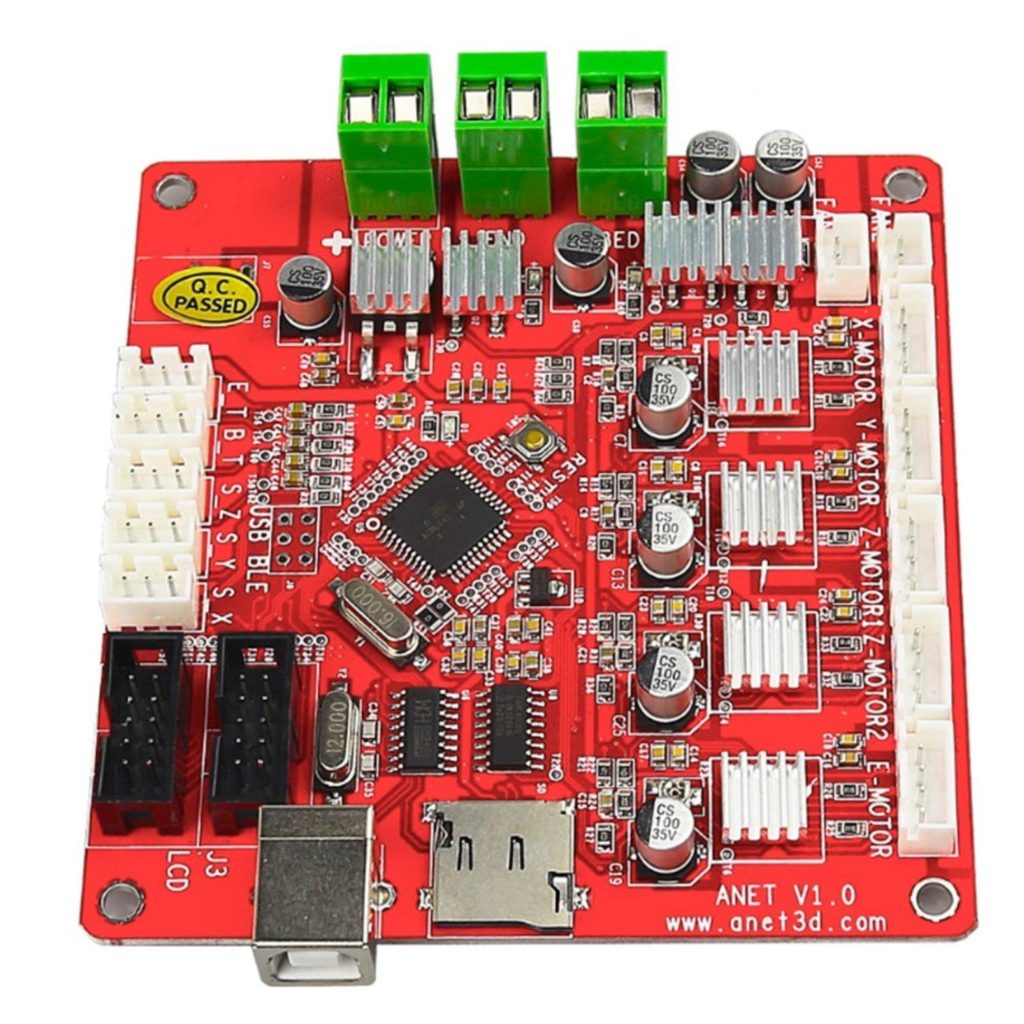 The Mainboard features On-Board 16-step A4988 Drivers which do just fine for standard build volumes. The nice part about On-Board drivers is you can tune the amps through the firmware and don’t have to mess with a multi-meter to tune each motor. If the motors are too load for your liking simple add some stepper dampers, these take the noise right out.

It’s operating voltage is 12V – 24V which makes it a good candidate for swap upgrades of other printers. I find this board to be a better solution over the most commonly used RAMPS Boards. The board has JST-XHP Connectors which are easy to make and stay in place well.

Check out our article on this board: https://3daddict.com/anet-mainboard-3d-printer-controller/ 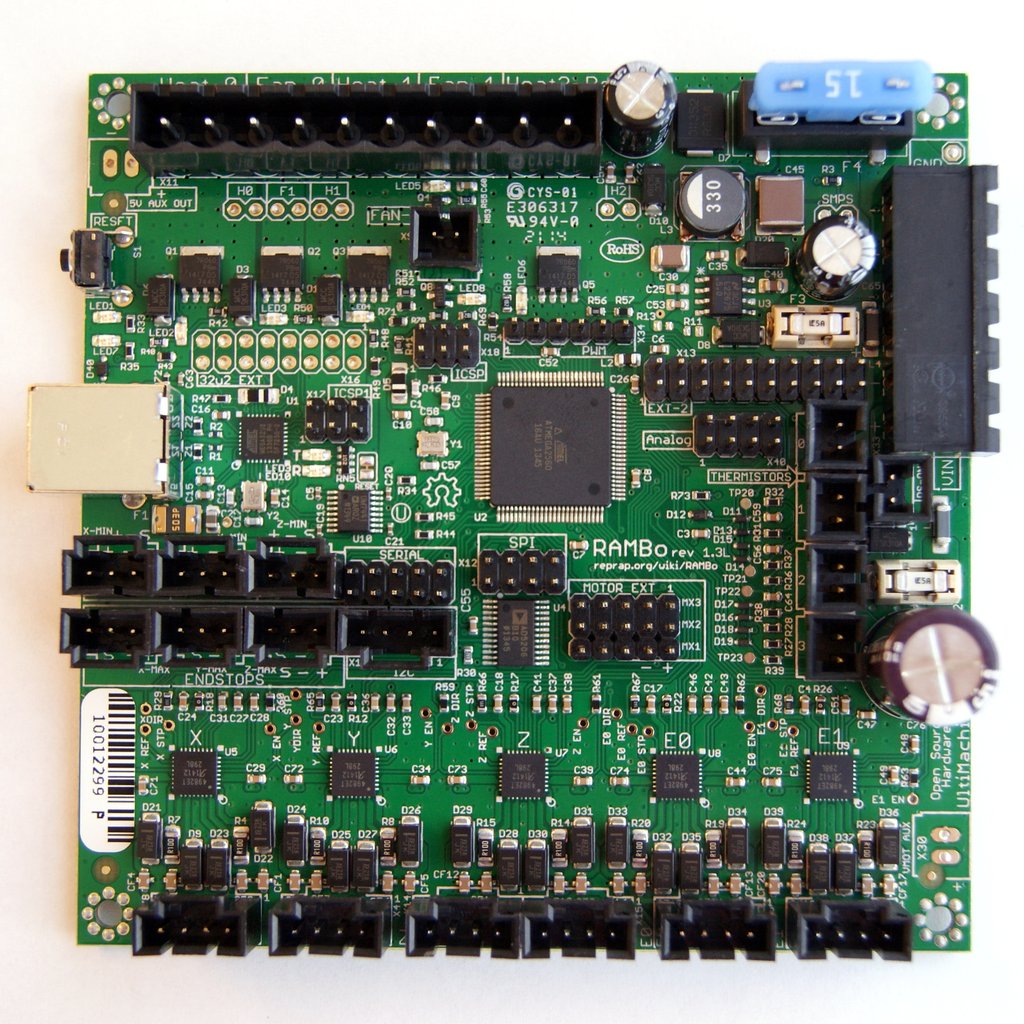 This is RAMBo v1.3L. The RAMBo 8 Bit 3D Printer board is an all in one 3D printer motherboard. It is a full remix of our RAMPS design with the Arduino MEGA and stepper drivers all on one integrated PCB. That is where it got the name RAMBo – (R)epRap (A)rduino-(M)ega-compatible (M)other (Bo)ard.

RAMBo is designed to work with the current RAMPS generation firmwares with minimal modifications to add firmware control of the digital trimpots and the microstep setting pins. –source 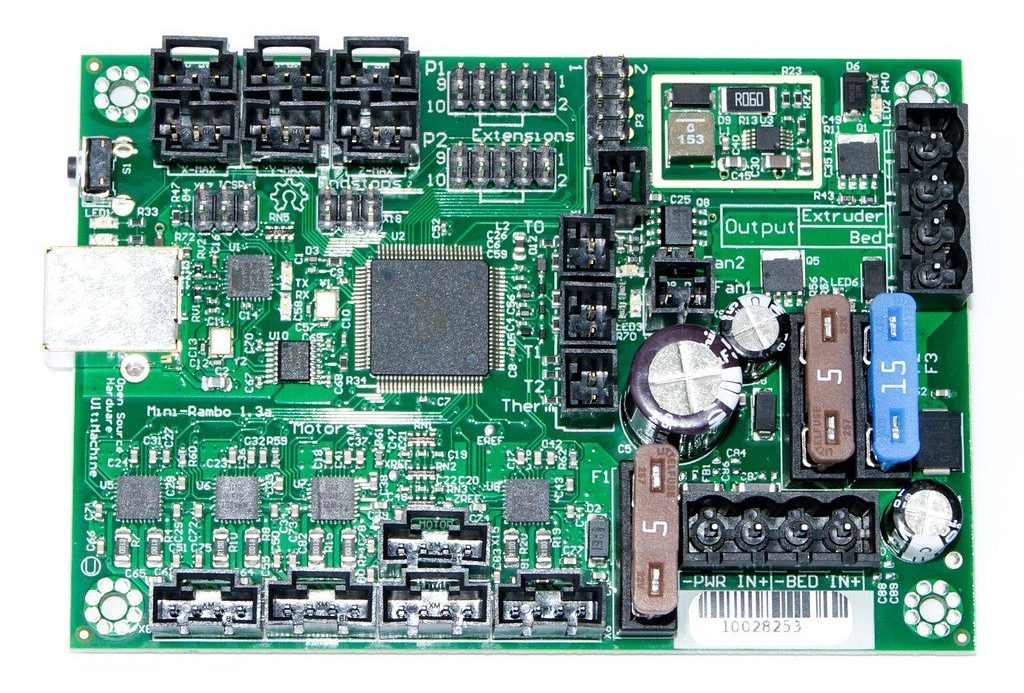 This is Mini-Rambo v1.3a. The Mini-Rambo board is an all in one 3D printer motherboard. It is a compact version of our RAMBo v1.3L design with the Arduino MEGA and stepper drivers all on one integrated PCB. A great alternative board if you need just the basics! 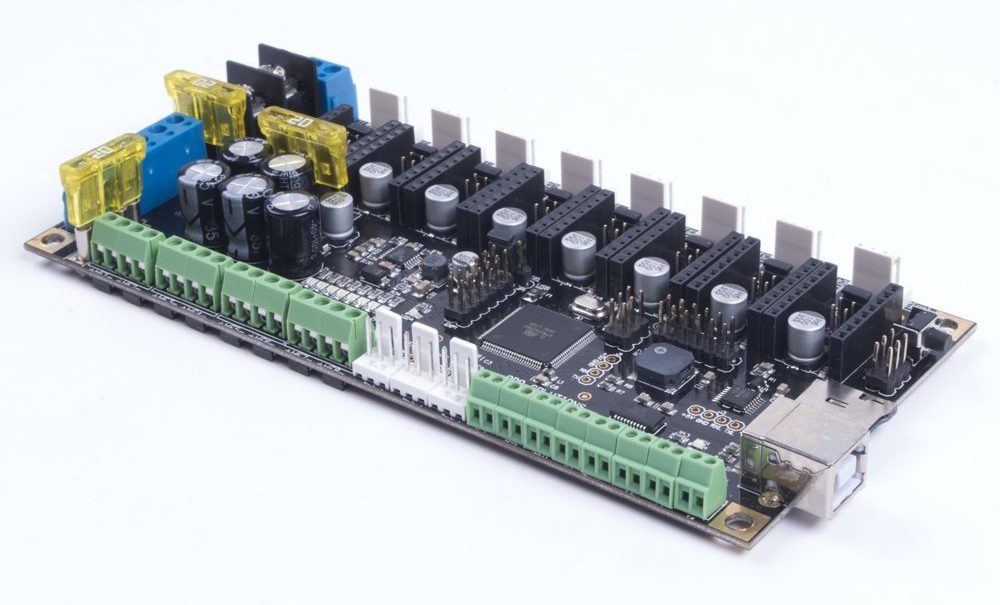 The Azteeg X3 PRO is a 3D printer controller with support for up to 8 Stepper drivers and up to 5 extruders. It is based on the Azteeg X3 controller board that’s been used by many 3D printer builders. Powered by the Atmel ATMEGA2560 micro controller chip, the X3 PRO is designed with excellent high current capability and compatibility with popular firmwares like Marlin and Repetier.

The Dual Heatbed Mosfets (single control) allows flexibility of running multiple heatbeds and with 3 separate inputs and fuses it’s sure to cover most power input configurations out there. 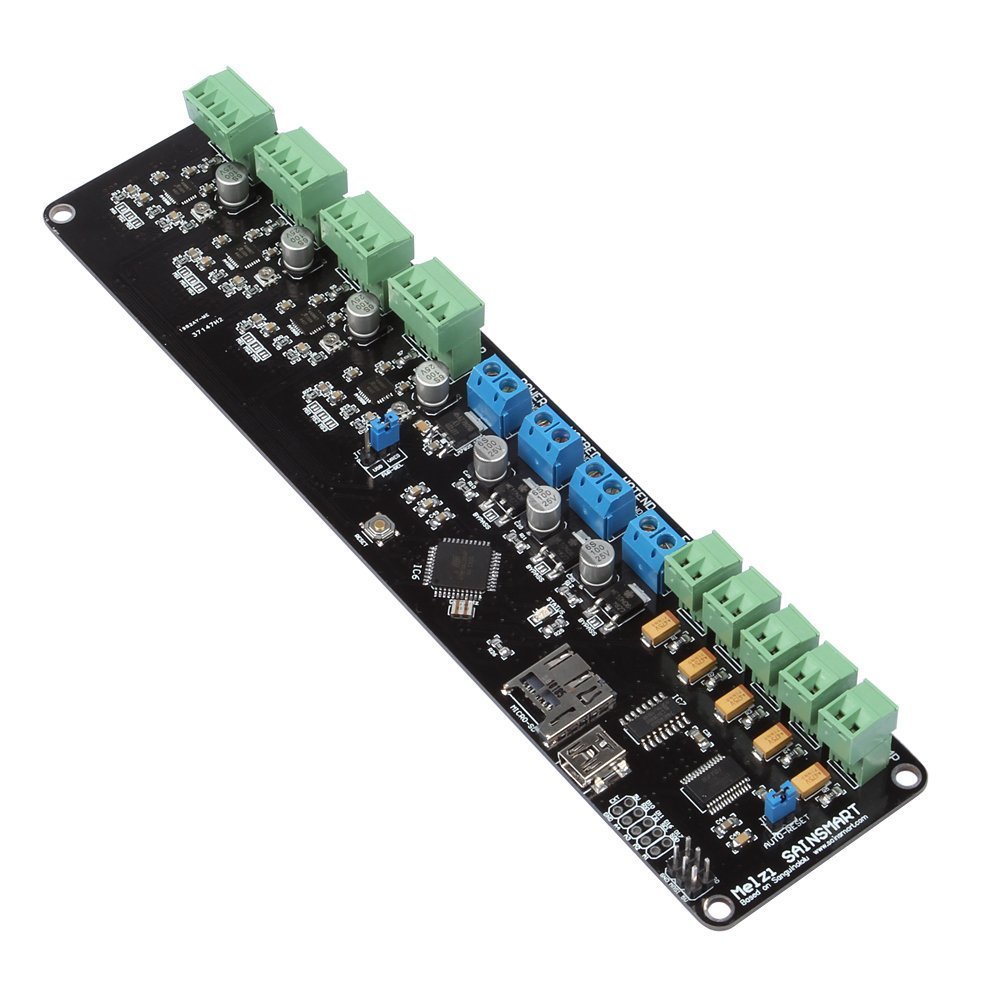 A compact all-in-one controller board for RepRaps with one extruder head, optimized for mass production.

The point of RepRap is to make itself, of course. But sometimes people just want plug-and-play RepRap electronics so they can concentrate on the other aspects of the machine, or just because they are more software or mechanics oriented than electronics oriented.

Melzi is designed to be a complete set of RepRap electronics that should be very cheap to mass produce. It was originally based on the Arduino Leonardo and is named after Francesco Melzi, who was Leonardo da Vinci’s pupil. –source 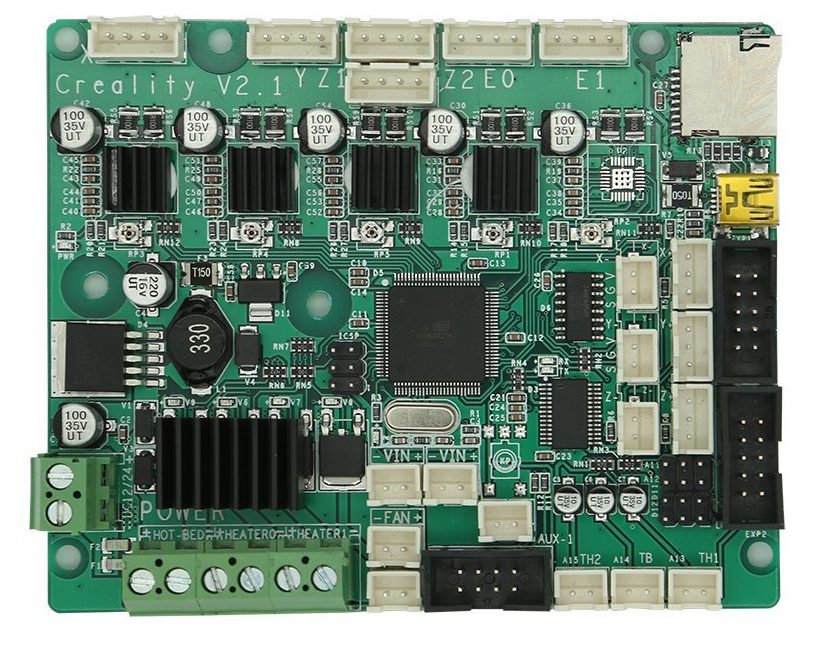 Not much info on this board yet but I am sure we will see this more with new versions of this 8 Bit 3D Printer Board as well. 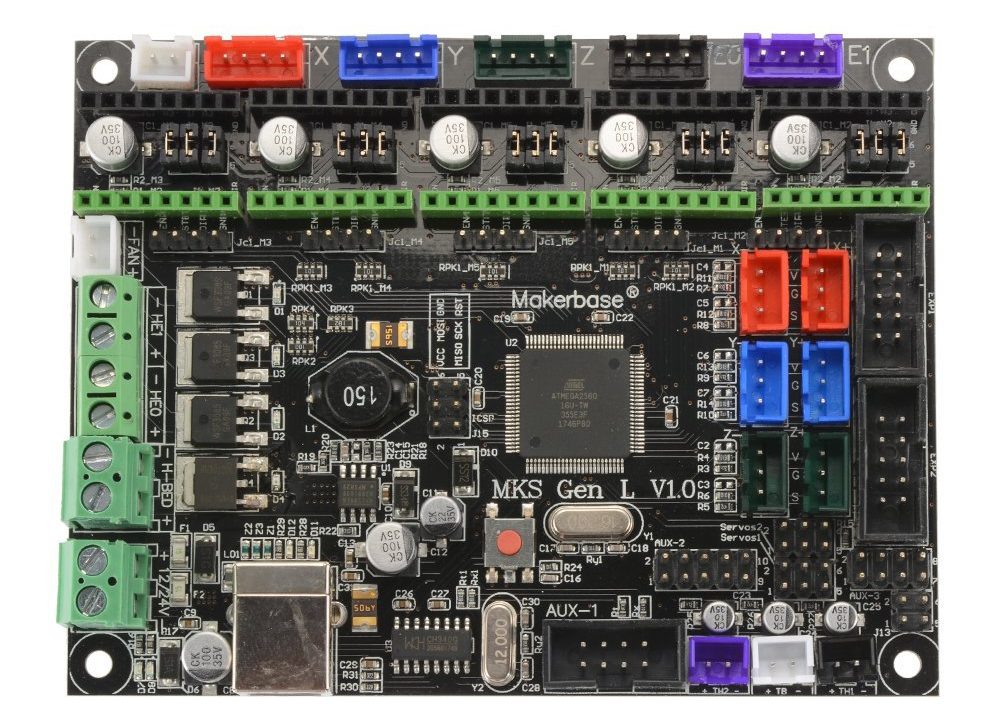 The MKS Gen-L 1.0 8 Bit 3D Printer Controller Board is designed by Makerbase and is a combination of the Arduino Mega 2560 and the RAMPS 1.4 board in a smaller and more cost effective package than the MKS Gen 1.4 controller board.  It has the same capability as the RAMPS board with the following advantages:  It can run from 12 – 24V for those high power applications, it consists of a single board with improved thermal control, it has an improved USB controller and the connector for the screen is already on the board.

Did we miss a popular board choice?

Let us know down in the comments section and we’ll check it out to add to the article.

The Best OctoPrint Plugins to Enhance Your 3D Printing Experience

What Is the Flow of 3D Printing and How Do You Adjust It?

3d print wont stick or How to Get Prints to Stay...

How to Use Octoprint to Control your 3D Printer